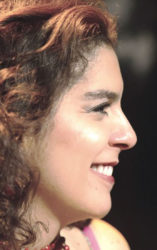 Brazilian singer Fernanda Cunha (based in Rio de Janeiro) has toured in the most important jazz festivals in the world such as Aarhus Jazz (Denmark), Jazz a Juan (France), Jazz al fin (Argentina), Borneo Jazz (Malaysia), Vancouver Jazz festival ,among others. She performed at Reigen Live two times (2010 and
2011) as part of Ig Jazz and Wien Jazz. In 2017 she released the 7th album of her career, “Jobim 90” is dedicated to the most important songwriter in Brazil: Antonio Carlos Jobim. Jobim left hundreds of wonderful tunes, but Fernanda has chosen to record the songs he wrote melody and lyrics for. Her repertoire includes “waters of mach”, “samba do avião”, “triste”, “chovendonaroseira” and others less recorded like “Angela”, “Passarim”, “Ana Luiza” and the unique “Two kites”(written in English by Jobim). Fernanda Cunha is releasing her 8th solo album. This album features a colourful repertoire, she is singing songs written by Filó Machado, one of the most creative and talented songwriters of Brazil.