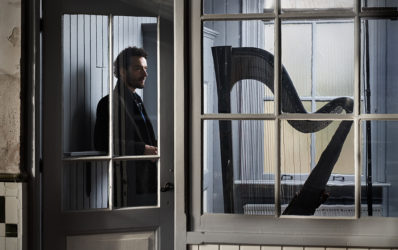 The harp is still a rather rare instrument when it comes to jazz and pop music. It’s often high-class productions in which the harp plays a role, sometimes a major role. Dorothy Ashby and Alice Coltrane established this beautiful instrument in jazz. In recent years in pop music , Björk, Joanna Newsom and Arcade Fire were responsible for beautiful harp moments.
For some years, the 30-year-old Dutchman Remy van Kesteren has been responsible for distinguished harp recordings in the crossover field. In 2016 he recorded the famous album “Tomorrow’s Eyes” for the classical label Deutsche Grammophon, on which he offered not only many original compositions but also highly interesting adaptations from classical composer Frederik Mompou to ambient star Nils Frahm.

His current recording “Shadows” also balances sublime with a variety of sounds. Remy van Kesteren, who also plays synthesizers and sometimes sings, has created the flamboyant title number with British pop songwriter Fink. At the Jazz Fest Wien he will be performing with his Remy. X band. Crossover at the highest level is to be expected!