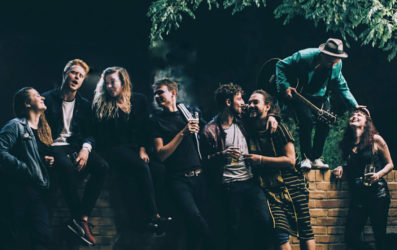 An Irish artist, a Canadian surfer, a Portuguese tour guide, a Latvian paralegal, an androgynous cockney and two UK students walk into a bar. Why? To play a set of life-affirming folk-punk-blues, of course. For collectively they are The Great Malarkey, purveyors of a quite wonderful racket, and this year they released their second studio album, ’Doghouse’.
‘Doghouse’ captures not only the raucous multi-instrumental energy of the band’s famed live shows, as heard on their first album, ‘Badly Stuffed Animals’, but also the subsequent bruised vulnerability of the morning after the night before. Drawing inspiration from other worldly and wonderful chroniclers and celebrators of the human condition, including Tom Waits, The Pixies, The Pogues, Beirut, Nick Cave, Fanfare Ciocarlia, Manu Chao, The Dead Brothers and Toots and the Maytals (whom they were honoured to support at only their third gig), The Great Malarkey flirt with all these influences to produce a rootsy, riotous, progressive-folk fusion of many genres and none.